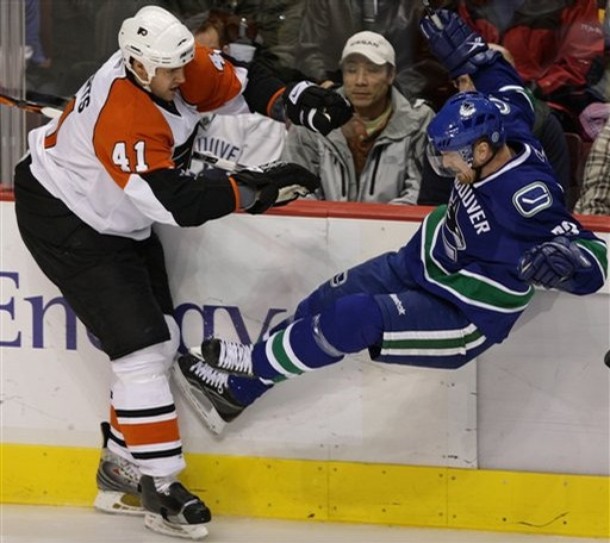 The trading deadline for 2010 is now history, and although we saw a record-breaking 31 trades involving a massive 55 players and 25 draft picks, most of the trades involved depth and role players.

We didn’t see the Hossa, Jokinen, Richards types of deals as we saw in the past, an expected result of the maturation of the cap-restricted era. Most teams simply aren’t able to pull off any big trades with overpaid salaries and long contracts in their better or not-so-better players.

So it wasn’t surprising so see Mike Gillis making only three minor trades this season.

Coming into this year’s deadline, as I wrote in my previous posts, the Canucks was in an odd situation. They didn’t have any significant needs in terms of upgrade. This is relative, of course, but if you look at the Bruins or the Flames, Boston clearly needs some kind of offense upgrade with the loss of Kessel to Toronto. The Flames hanging on to a chance for a playoff berth needs to improve their defense with the departure of Phaneuf.

On the contrary, the Canucks loaded up on defense during the off-seasons, to an extent where the team can split into two complete preseason-squad. With the likes of Bieska, Mitchell, Salo, Edler, O’Brien, Ehrhoff, Rome, Schneider, Lukowich and Baumgartner, who’d ever thought the team will need to further add defensemen?

However as the season progressed, injuries as well as other factors set in. The remarks or attitudes of Matthieu Schneider, and the constant injuries to the top 3 regular defensemen greatly affected the team. With Baumgartner called up to fill in the holes left open by Bieska and Mitchell, Gillis is again forced to deal for a D-man.

Before the deadline, Gillis had hinted that he’d like to acquire a third-line forward, perhaps a centerman with a better physical presence or scoring abilities. Coach Vigneault seems to be happy with his top two lines as well as the grit of his fourth-line.

There aren’t a lot of top-rank players on the trading block this season. The most sought after forwards were probably Wolski, Ponikarovsky, Modin, Whitney and Stempniac??!! But with only about 500K to spare in cap space, and the depleted defensive corp, the Canucks will have to trade one of their roster players to make that happen. A risk Gillis probably isn’t going to make.

The good news is, part of that wish was granted after the Olympics, as the return of Pavol Demitra and his spectacular play for Team Slovak provides just that depth in the forward lines. Demitra’s reunion with Kesler to form the new RPM line along with new “M” Mason Raymond proved success in the recent games.

Samuelsson got bumped to the third line (a potential problem in the making), but the sudden resurgence of Kyle Wellwood could prove great production if the team can stay out of the box so the third line can get enough ice-time.

So at the end of the day (or the beginning of the day…) Gillis is left with JUST getting a defenseman. But who isn’t?

Anyways, let’s take a look at the other two trades first.

Yes, if you try to wiki Sean, he’s probably one of the few players you don’t get any results on. All I know is that he’s a 6th round pick in 2005 by the Devils. So if we add the conditional 6th round pick, it’s probably like two Zimmermen for a Schneider.

Great deal~ Since we won’t be using Schneider for the remainder of the season, and his contract expires in the summer, two Zimmermen are better than a bag of hockey pucks.

Yan Stastny, on the other hand is famous. Not so much for his own accomplishments – yet, he’s the brother of Avalanche start center Paul Stastny and son of Hall-of-famer Peter Stastny.

Yan was drafted 259th overall in 2002, a centerman who split his time between the NHL and AHL throughout the past eight years. Yan has never spent an entire season with any NHL club, including his stops at Oilers, Bruins and Blues.

Yan is Manitoba-bound, plain and simple.

This leaves us with the Andrew Alberts trade.

Andrew Alberts, drafted in the sixth round in 2001, is a giant on the blue-line. At 6’5 weighing 230 pounds, Alberts has very limited offensive upside, instead he is a hard-hitting stay-at-home defenseman. In fact, Alberts had never scored more than one goal per season in five of his NHL years (Bruins, Flyers, Hurricanes), except this season, which he now has two.

However, the Canucks have plenty of offensive defenseman, a physical and reliable D-man may be just what they need for success in the post-seasons, especially with Mitchell’s status unclear.

But just how reliable is Alberts? If the +/- rating means anything, which I believe it does somewhat, Alberts in a very weak Carolina team was still able to get a team-high +7 rating as oppose to the teams -27. So hopefully, he can provide that confidence factor in the back-end for his new teammates.

I mean, after all, a 3rd-rounder in a mediocre draft year for a proven 28-year-old NHL-er with one more year contract at $1-million sounds very reasonable.